skip to main | skip to sidebar

No changing of place at a hundred miles an hour will make us one wit stronger, happier, or wiser. There was always more in the world than men could see, walked they ever so slowly; they will see it no better for going fast. The really precious things are thought and sight, not pace. It does a bullet no good to go fast; and a man, if he be truly a man, no harm to go slow; for his glory is not at all in going, but in being. 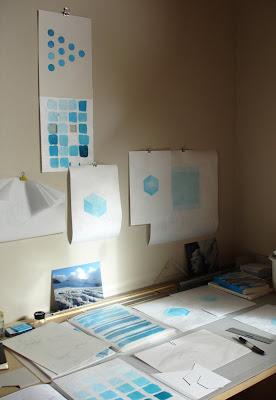 The Glacier Project is a personal response to the elemental characteristics of glaciers, snow and ice by British artist Liz Jackson. The project presents an emotive, poetic and sculptural reading of landscape through book objects and prints.

Now working in France, at the foot of the Argentière glacier, Jackson says that living in the Alps has helped her to appreciate the glacier and the mountain landscape surrounding it. Her familiarity with the environment means that 'observations, thoughts and impressions can accumulate over time. Living by the glacier provides a constant reminder of its beauty, scale and light – I thought perhaps it would become familiar by its habitual presence, but for me its complexity grows, I am constantly re-energized and re-awed by its blue mass resting above the valley.'

Jackson's project proposes a visual study of glaciers as opposed to a scientific study – not as attempt to re-work or reject a scientific approach, but simply to offer an alternative interpretation. Jackson aspires to provide poetry – 'poetry that science sometimes filters out in the pursuit of objective discourse.'

Jackson became interested in glaciers while studying at the Royal College of Art, during which time she researched natural phenomena, such as the aurora borealis and the colour of the sky, and their visual and scientific descriptions. She engaged enthusiastically with the scientific mode of explaining, with its concise, diagrammatic language.

'Whilst considering the focus of the second year of my MA I was seeking an area of earth science that still retained an element of wonder (there is still a sense of the unknown within glacial dynamics and behaviour) yet was small enough to be part of, and open enough to confer with. Glaciology seemed like an approachable area of science: glaciologists work in the field, make observations, take measurements – simple tasks I could easily relate to. I liked the idea that a glaciologist was simply defined as "someone who studies glaciers" – exactly what I wanted to do.' 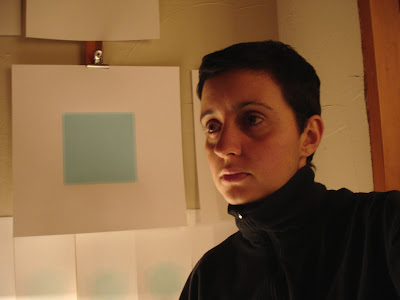 In Glacial Vocabulary Jackson offered a number of eminent glaciologists, explorers and geographers the opportunity to express their personal ideas about glaciers. She visited Professor Michael Hambrey and his students in the glaciology department at the University of Aberystwyth, where she found that 'the common factor was that earth scientist and landscape artist share a deep appreciation and fascination with the natural landscape.'

Initially Jackson investigated the inherent visual characteristics of glaciers (formation, colour and features) and tried to forge new means to communicate them. This developed into an in-depth colour study of Glacial Blue: a series of intricately layered screenprints exploring colour density and form. The prints have become an archive of printed colours and colour research work – recording shifting and transient colours in nature and analysing colour depth and mass inspired by daily observations of the Argentière Glacier.

Jackson uses the screenprinting process to create sculptural forms on a surface. Ink becomes strata, suspending colour within its layers, and colour is three-dimensional, building depth, intensity and mass. 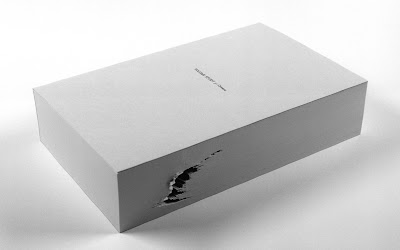 Jackson writes of her practice: 'The work is inspired by my experience of the natural landscape – observing subtle colour shifts and noticing how light transforms and animates every surface of the natural environment. The extracting and the abstraction of something small (yet significant to me) of a detail I’ve experienced. Then, in the studio my working process is an exploration of how to visually communicate this observation. Colour, light and form (and the relationship between these three elements) provide the central preoccupations of my work.

'Transient moments, colours and illuminations, held onto in the mind’s eye – a human capacity to be somewhere, to experience something and communicate the essence of that sight. The work becomes a personal record – a document that captures something of the lived experience of being in and observing the natural landscape. I enjoy details, nuances, the impossibility of colour and the transient quality of these moments experienced in nature. Nature is forever transforming itself or being transformed through the light that falls upon it – never static, never fixed, never flat – totally alive and in permanent flux – pure inspiration.

'The work is a response to nature not a replication of it. In highlighting a single aspect (colour) you remove distractions – getting away from the object you get closer to its essence.'
Posted by NANCY CAMPBELL at 13:35

Supported by the National Lottery through Arts Council England